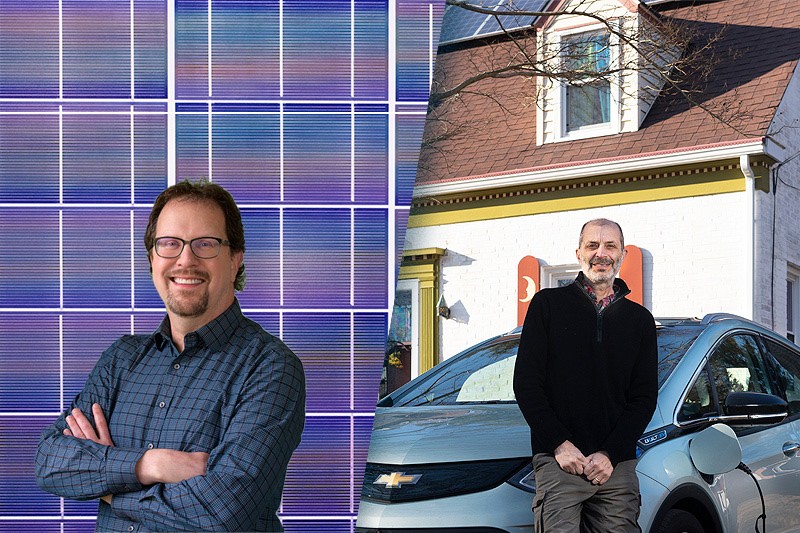 University of Delaware researchers will soon begin work on two new renewable energy-related projects, backed by about $4 million in new U.S. Department of Energy grants as well as cost-sharing grants from UD and several partners.

Jeremy Firestone, professor in the College of Earth, Ocean and Environment, and William Shafarman, director of the Institute of Energy Conversion and professor of materials science and engineering, are the principal investigators on the projects, which are getting about $2 million each.

Firestone, director of UD’s Center for Research in Wind (CReW), will explore the decision-making process of those who adopt the use of solar energy systems and/or electric vehicles. He and his team will look at primary influences on those choices, including incentives and barriers, and develop the nation’s first large database of those factors. The goal is to identify non-technological barriers to clean-energy co-adoption. Support for this work comes from the Energy Department’s Solar Energy Technologies Office.

Shafarman and the IEC team will work to show how a new process recently developed by the IEC’s Brian McCandless will not only improve the efficiency of solar panels but also simplify the manufacturing process for industry, allowing firms to make their solar products both better and less expensive. Support for this work comes from the Energy Department’s Office of Energy Efficiency and Renewable Energy.

Firestone has done extensive research on large-scale energy infrastructure and the social dimensions of renewable energy technology. This new study, he said, is both a continuation and a departure from that work.

“Although both threads focus on social dimensions of technology, in my prior work I examined reactions to renewable energy infrastructure, while the present research will look at motivations for and barriers to a personal decision to put solar panels on one’s roof or buy an electric vehicle or both,” he said. 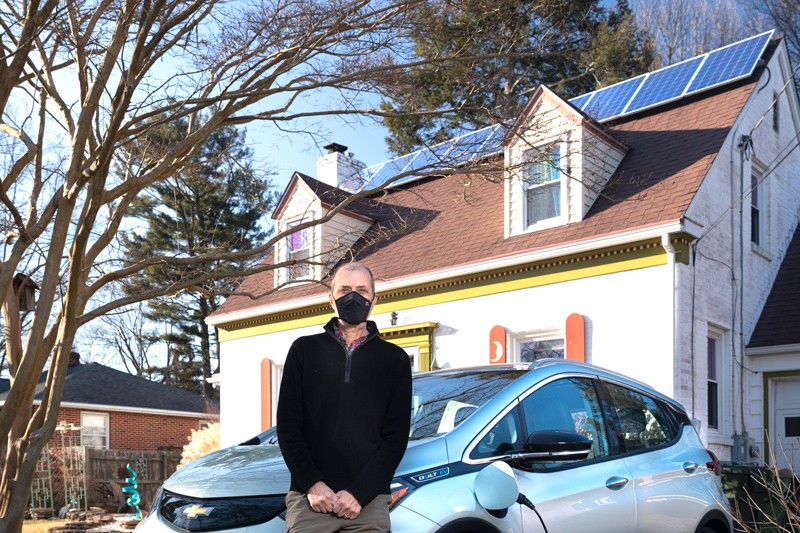 Professor Jeremy Firestone of UD’s School of Marine Science and Policy stands in the driveway of a house with solar panels and an electric vehicle.

It is a natural outgrowth of CReW’s focus on electric vehicles and vehicle-to-grid (V2G) technology, he said.

Consumers weigh many factors when considering what to buy and this study will draw on expertise in cognitive and social psychology and behavioral economics. One of the goals of the research is to identify consumer characteristics and patterns of decision-making that lead them toward or away from purchase of rooftop solar or electric vehicles or both.

“Individuals may be influenced by the presence of rooftop solar panels on the homes of their neighbors, views about the return on investment in an electric vehicle or personal and social norms related to a clean-energy future,” Firestone said.

In the second survey, researchers will evaluate low-cost interventions and incentives and whether they increase the probability that a person with solar panels would also purchase or lease an electric vehicle, and vice versa. One of Firestone’s colleagues, George Parsons, Unidel E.I. du Pont Professor of Marine Science and Policy, will lead this aspect of the research.

Collaborating researchers include UD’s Steven Hegedus, senior scientist at IEC and professor of electrical and computer engineering, along with partners at the University of California, Davis, the University of Chicago, Lawrence Berkeley National Laboratory and a consultant with V2G expertise.

The IEC project was primarily developed by Brian McCandless, who learned that he had won the new grant the day before he retired from UD. 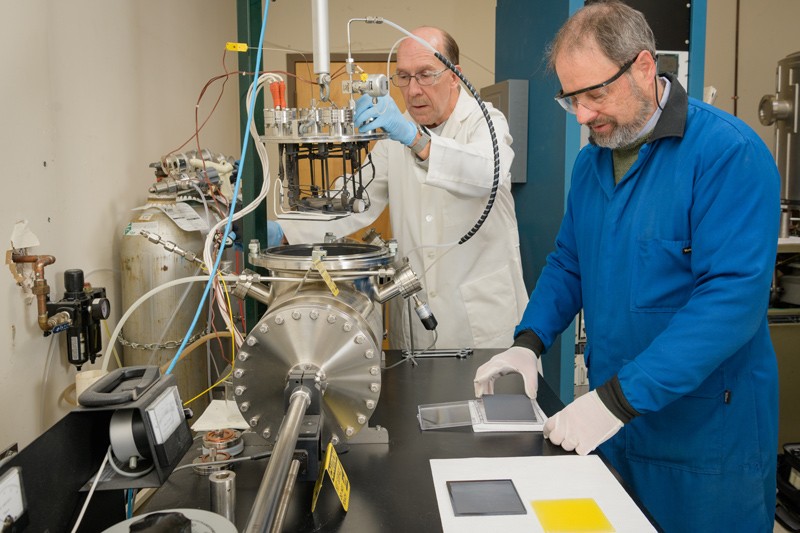 This photo was taken in 2018, before the coronavirus pandemic necessitated wearing masks and social distancing. Before retiring, UD scientist Brian McCandless (right) worked as an associate scientist with the Institute of Energy Conversion (IEC). McCandless applied for the recent Department of Energy grant that Bill Shafarman’s team will use to study ways to improve manufacturing of solar panels. In this photo, McCandless is working with Wayne A. Buchanan, who was a research associate at the IEC.

Shafarman now is the principal investigator on the project, “but all the credit for the concept goes to Brian,” Shafarman said. “It is his vision and brainchild and it’s great — an exciting new project.”

Working with Shafarman at IEC will be Associate Scientist Ujjwal Das and Research Associate Shannon Fields. Other partners and subcontractors include Anderson Janotti, associate professor in materials science and engineering, and researchers at Drexel University, Ohio State University and the National Renewable Energy Laboratory.

The grant also will support up to three students, all in materials science, Shafarman said.

In 2018, McCandless used the UD-patented Vapor Transport Deposition System he developed to show how adjusting the properties of thin-film photovoltaics produced smoother sailing for the electrons traveling through solar cells. That opened the door to increased efficiency and reduced cost.

“It was very good science and now we’re trying to make it good technology, while also diving in to understand the underlying fundamentals of the materials and the solar cells we make from them,” Shafarman said.

The advance is compatible with existing commercial processes used by the nation’s largest solar manufacturers, he said.

Thin-film technology is a staple at IEC, which was established in 1972 and is considered the world’s longest continuously operating solar research center. Thin films have advantages over the more commonly used solar wafers, including higher flexibility, lighter weight and simpler manufacturing.

The new process could increase the efficiency of thin films to 25%, a significant stride from the present highwater mark of 22.1%.

The U.S. Department of Energy Solar Energy Technologies Office supports early-stage research and development to improve the affordability, performance and value of solar technologies on the grid.

The mission of EERE is to create and sustain American leadership in the transition to a global clean energy economy.