Inside a solar-cell startup’s success 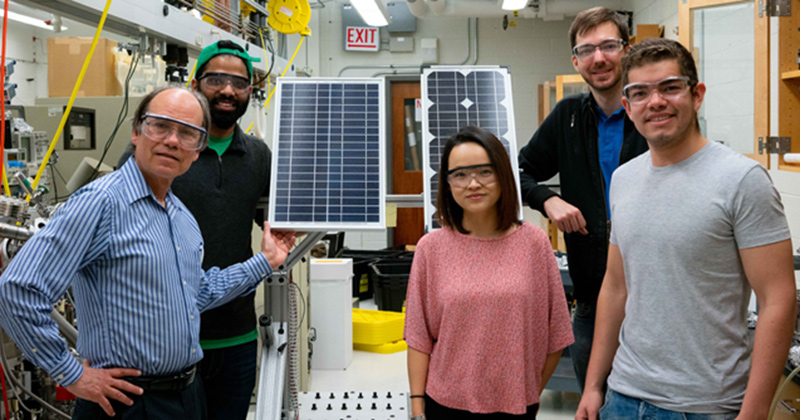 A startup that’s figured out how to make solar cells at a very low temperature is following the entrepreneurial process at the University of Delaware because of its international renown for research and innovation in the space.

“I came to Delaware from India after completing my undergraduate degree in electrical engineering,” said Abhishek Iyer, who is working on his doctorate in electrical engineering after obtaining a master’s last year. UD is home to a world-renowned solar research lab and has nearly 50 years of history in research in this field. “I always wanted to be associated with a place that was fantastic for solar, and when I got in, it was a no-brainer that I was attending.”

Iyer and his startup have also been helped by Horn Entrepreneurship, which provides the UD community with opportunities to explore the potential and power of their ideas through programs, grants, mentoring, teamwork and support.

Iyer is co-founder of SHIO, a solar tech company that develops low-cost, high-efficiency solar cells. The name SHIO is an acronym created from the first letters of the co-founders’ last names.

The company’s latest milestone occurred April 27, when it won first place and $50,000 at LaunchR, a Rutgers University student-run clean technology innovation contest that is funded by the U.S. Department of Energy. SHIO was able to take part in innovation workshops and consult with mentors in the green technology space before pitching to an expert panel of judges, but the story of SHIO starts long before its participation in LaunchR. Abhishek Iyer (left) has been building SHIO through research opportunities at the University of Delaware. James Hack is also part of the SHIO team.

While pursuing his graduate degrees at UD, Iyer worked with Robert Opila, a professor in the Department of Materials Science and Engineering. Opila became a mentor for Iyer’s work with SHIO. The pair quickly developed a high-potential solar technology that eliminated some of the efficiency problems that often plague the green technology.

Iyer explained the advantage his research offers: “Our unique value proposition is that we can fabricate our solar cells around room temperature, as opposed to greater than 1,000 degrees Celsius for a conventional solar cell. The potential cost savings are about 40 percent via the elimination of high capital-intensive tools and operational costs attached to them.”

The SHIO technology focuses on providing high performance in a cost-effective package. The promising research early on in Iyer’s work inspired conversations with peers in his community and industry.

“We learned about Hen Hatch, a competition and saw it as an opportunity to further explore the impact of our research, so I developed the presentation for the pitch and made it to the semifinals in 2016,” Iyer said.

Hen Hatch is Horn’s premier startup competition, and it provides participants with the opportunity to make connections and collect feedback on their ideas. By competing in Hen Hatch, Iyer was able to connect to and learn from many investors and experts in the field. SHIO did not reach the finals, but the promise of the venture became evident.

“I must have sounded like a scientist just bragging about his research with no idea of how to make money from it,” Iyer said with a laugh. “The judges thought we had an interesting idea that would work well once we were given entrepreneurial help, and Dan Freeman and John Currie convinced us to apply for the NSF I-Corps program.”

Dan Freeman is the founding director of Horn. John Currie has offered guidance to students in a startup advising role at Horn.

After finishing the NSF I-Corps Sites program, Iyer then took SHIO through the extensive seven-week customer discovery program at the NSF I-Corps Teams level. Customer discovery is the process of speaking to and learning from potential customers to adapt the idea to best fit the needs and wants of the market. Iyer worked with now-team members Hack, Opila and Keith Modzelewski, then a Horn adjunct professor.

The venture was able to test and get feedback on the proposed hypothesis to better improve the concept. Iyer, who was awarded best Entrepreneurial Lead for his NSF I-Corps group, credited his team and other supportive individuals for the early success of SHIO.

“Keith Modzelewski was instrumental in developing the best and most optimized customer discovery interviews,” Iyer said. “He really helped us get to the essence of what we wanted to dig into very quickly. Christina Pellicane, director of commercialization programs [at Horn], was also very helpful, and she encouraged us to apply for the Blue Hen Proof of Concept program. I was really lucky to work with Dr. Opila as well; he really dove headfirst into the project with us. The support and help from James Hack, co-entrepreneurial lead for SHIO, was also unparalleled.”

The SHIO team won additional funding through the NSF I-Corps program and gained access to more experts in the industry. Through Horn, Iyer and the SHIO team were introduced to Lou DiNetta, who assists students with federal grant writing. DiNetta has a background of more than 40 years of experience in the photovoltaics. After completing the grant with the co-founders, he joined the team and continues to provide business support.

Eventually, SHIO leaders chose to apply to LaunchR, the Rutgers student-run clean technology competition. The solar tech venture was one of the top six teams to pitch its idea in front of a panel of judges from the Department of Energy and experts in the clean tech space.

“The other teams were from top-tier universities with some impressive technology, but none of our ideas overlapped,” Iyer said. “We were able to take first place because of all of the extensive preparation work we had done, because of the involvement and support of Horn Entrepreneurship. When they announced SHIO as the winners, I almost teared up. I just couldn’t believe it.”

The venture hopes to resume researching in earnest this summer.

“We never thought we would be doing what we’re doing today,” said Iyer. “We were loving what we were doing, seeing the commercial impact of our research. It was really rewarding, and if I had stuck to just research, I would have never been able to see if the industry actually cared about what I was researching.”