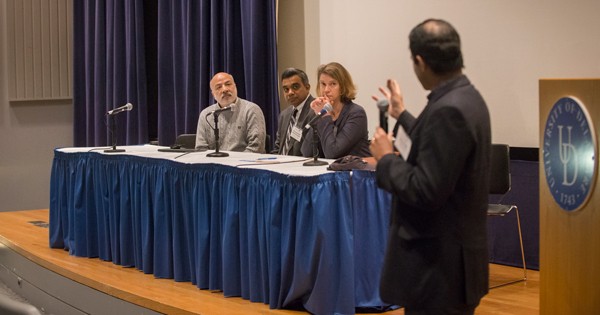 Phil Barnes looked around the Trabant Center Theater during a break and saw exactly what he hoped to see at the University of Delaware’s two-day Smart Cities and Sustainable Energy symposium.

“I see two Newark City Council members talking to faculty members, we just listened to a state transportation director and now I see him shaking hands with an urban planner,” he said.

Those kinds of connections and conversations were every bit as important as anything said from the podium or during panel discussions at the symposium, which was designed to explore the challenges facing urban development and energy needs around the world, especially in the global South.

Many disciplines from throughout the University were represented – including engineering, public policy, energy, environment, finance and materials science – demonstrating the complexity of the challenges facing cities and developing nations in the future.

“The value of having this in Delaware, with the smallness of this state and a venue like this, is that you get so many different practitioners and academics together at the same time,” said Barnes, associate policy scientist and assistant professor in the School of Public Policy and Administration.

“The University of Delaware is well-positioned, if not uniquely so, to organize and catalyze leadership in the area of smart cities and sustainable energy,” said Charles Riordan, vice president for research scholarship and innovation.

This symposium was meant to set the table for just that. And conference co-chairs – Prof. Nii Attoh-Okine of the College of Engineering and Associate Research Prof. Lawrence Agbemabiese of the Energy and Environmental Policy Program – invited a wide variety of thinkers and practitioners, which allowed for expansive, informed discussion and some interesting debate.

What is a smart city anyway? That question is unsettled for many. How do you define city? How do you measure “smart?”

“We understand this problem requires an interdisciplinary approach,” said Babatunde Ogunnaike, dean of the College of Engineering. And that is one reason the University will launch an Institute of Data Science in the spring of 2018.

“We want to make this too good and too consequential to be ignored,” Ogunnaike said. “And we do not want to sacrifice freedom and privacy for progress and security.”

Data science is a crucial component of smart development, Attoh-Okine said, “the lifeblood of smart cities.”

But smart cities are not just digitally sophisticated, he said. They have networks of goods and services in many sectors, such as transportation and healthcare. All generate enormous amounts of data, with constant updates. To be useful and prevent false findings, that data must be carefully managed and mined, Attoh-Okine said.

“If you don’t have the understanding, the technology to understand the data, you are not going to get the information you need,” he said.

Saleem Ali, Blue & Gold Professor of Energy and the Environment, moderated a panel on climate change and sustainability. He serves on a working group of the United Nations’ International Resource Panel, which is trying to address issues of resource efficiency around the world.

But getting good information on global energy and climate situations is a daunting challenge, said Andrea Sarzynski, associate professor in UD’s School of Public Policy and Administration, because useful data are hard to come by. Differing definitions, gaps in information and other challenges also make it hard to know the impact of existing policies, she said.

“The best data we have is at the national level,” she said. “But that doesn’t help us with urban policies, big cities, small cities.”

On a smaller scale, the Delaware Department of Transportation collects enormous amounts of data as it monitors the state’s roadways and transit system and generates plans.

Gene Donaldson, director of DelDOT’s Transportation Management Center, said the agency is starting to build machine learning and artificial intelligence into the state’s system and will address connected and automated vehicles as it moves toward the emergence of “Smart Delaware.”

“The weakest link in an automobile today is the driver,” he said.

When “connected” automobiles – those that sense and respond to other vehicles to avoid collisions – prevent accidents, they are also preventing traffic delays, he said. And automated vehicles can expand mobility for the elderly and those with disabilities because the vehicle can come to them, he said.

Connected autonomous vehicles are a focus of research for Andreas Malikopoulos, associate professor of mechanical engineering. He offered a fascinating look into automated mobility systems, including a model city he and his students have built in UD’s Spencer Lab to test ideas and assorted variables.

Among the things he is studying are how connected vehicles might make it possible to eliminate stop-and-go traffic through intersections – and whether that level of connectivity is scalable over many intersections, roundabouts and merge lanes.

There are challenges in computer power, cybersecurity and what to do with vehicles that are not connected or automated. You can’t have pedestrians going through “automated” intersections either, Malikopoulos said.

But such ideas may contribute to future solutions in cities where traffic jams frequently foil schedules and foul up all kinds of things, including the air.

Automation and artificial intelligence introduce other challenges that must be carefully considered, said Domenico Grasso, professor of civil and environmental engineering.

Grasso said he has been delighted to see so much work on “smart cities” at UD and believes the University could be a leader in that research.

But he raised a caution flag, too.

“Much of the progress that we will see in ‘Smart Communities’ will be market-driven and there will be hidden risks,” he said. “As we move toward Society 5.0 and the ‘Internet of Things’ becomes more prominent and we increasingly become dependent or desirous of it, we risk not only ceding privacy and security, but also control.

“These systems of systems will progressively include and rely on artificial intelligence to make decisions which will impact our economy and our lives. It will be a challenge for policy professionals to stay ahead of where this is taking us. We must consider how we will adapt to these changes.”

Rapid change is matched by rapid growth around the world, adding to the pressures many areas are experiencing.

India, for example, has a “city-centric” future, said Chandrasekar Govindarajulu, a UD alumnus who now leads the Clean Energy team at the International Finance Corporation in Washington D.C. Already it has 42 cities with more than 1 million people in them. And as the migration to cities continues, India will need to build the likes of one Chicago every year, he said.

“The planning needs are massive,” he said, “and financing is another big piece.”

Pollution problems are a major concern, he said, as are inadequate governance structure and the lack of political will to make needed change.

Using technology and influence to address issues of equity and access to resources was a repeated theme throughout the symposium.

Prof. Ismat Shah, director of UD’s Energy and Environment Policy Program, recalled a day when his grandmother in Karachi, Pakistan, asked about his research. He started to explain his work in nanotechnology and she stopped him.

People are dying for lack of clean water, she said.

Shah says such moral considerations must carry great weight in sustainability plans and research. He pointed to South Korea’s guiding principle as a compelling call for all concerned: “All actions should be for the betterment of humanity.”

Agbemabiese, who is from Ghana, said researchers are moving toward consensus on what a “smart city” is, but the term can be hijacked by those with different motivations.

The early idea of smart cities was focused on technology and using digital technology to address chronic urban problems. Smart cities 2.0 is “technology-enabled, city-led,” he said. And smart cities 3.0 is “citizen-led urban development.”

Addressing inequity must be central to each part of the process, he said.

“Social inequity has been part of our pain for the 12,000 years we have been living in cities,” he said. “We still have injustice and pockets of serious inequity in the U.S. and as for the developing world – it is almost the norm.”

“You cannot have smart cities unless everyone has access to services,” he said.

The United Nations predicts that the world will have 2.4 billion more urban residents by 2050, he said – pressure that must be addressed in energy, air quality and climate policy.

He suggested three promising solutions – accelerating a shift to cleaner cooking (such as the use of propane, ethanol and low-emission cookstoves), scaling up renewable energy distribution, especially solar and boosting energy efficiency through building codes and standards.

John Macomber of the Harvard Business School said “smartness” plays out much differently around the world.

Some areas in Rwanda, for example, have found that they can deliver blood supplies by drone instead of waiting for better roads to be built.

Energy deficits are critical in many parts of India, he said. In Bangalore, microgrid photovoltaics may make a big difference.

“If you have no electricity, one kilowatt hour can change your life,” he said.

Addressing energy and environmental needs can change a city’s economic development significantly and Jeffrey Richardson, a project leader in UD’s Black American Studies, showed how his company – Imani Energy – is working to do that in Wilmington, Delaware, and in emerging projects in Africa.

The company installs solar power systems and addresses all aspects of that process, from project development to financing, installation, training and equipment.

Two professors – UD’s Raymond Scattone of the Energy and Environmental Policy Program and Lemir Teron of the State University of New York’s College of Environmental Science and Forestry – made a strong case for pursuing “just urbanism” instead of “smart cities,” putting the emphasis on justice rather than smarts.

Scattone said they see the idea of “smart cities” as a bad idea and nothing new, a catch phrase and nothing more than “neo-liberal technological mumbo jumbo.” The roots of the idea, he said, lie in private industry that is aiming to sell more computers and software.

Questions that must be addressed in urban planning, according to Teron, are these: Who is vulnerable? Who is displaced? Which workers are affected?

There is tension between efficiency and justice, he said, and these days you need an advanced statistics degree in econometrics to do urban planning. That can silence many voices that should be heard.

“If you’re moving toward a ‘smart city,’ is it inviting to those who don’t speak English?” Teron said.

And what about those who live in areas without broadband Internet access? Troy Mix, a policy scientist with UD’s Institute of Public Administration, has been looking at that question in rural Delaware.

That probably is significant, he said, but the research isn’t there yet. You could expect that areas with better access also have more jobs, higher quality jobs and better prospects for future growth since so many businesses require broadband Internet.

Also in the mix were two members of Newark City Council – Chris Hamilton and Mark Morehead – who wanted to explore how the city might benefit from the research and ongoing projects.

“This is a great opportunity for the city and the University to work together,” Hamilton said. “Many of us are trying to build that relationship. So much good could come of this. They’re researching other cities around the world – and they could research our city. It would benefit graduate students, professors and it’s a way to build a relationship.

“We’re a small enough city that we could use this and move into the future together.”