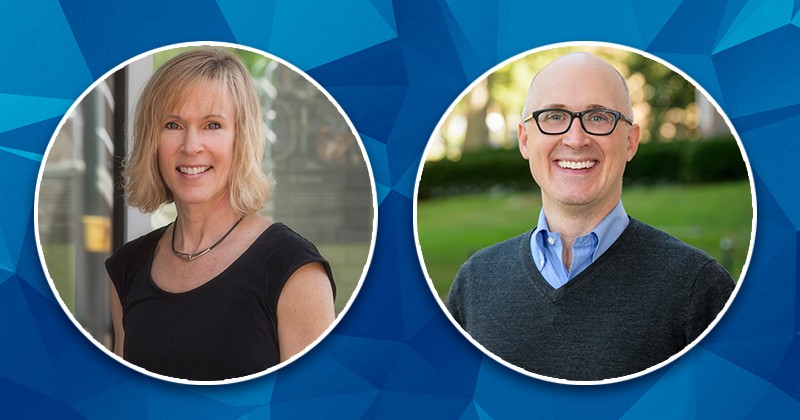 Kristi Kiick and Eric Furst of the University of Delaware have been named Fellows of the American Association for the Advancement of Science (AAAS), an honor bestowed upon AAAS members by their peers.

This year, 489 members have been elected AAAS Fellows because of their scientifically or socially distinguished efforts to advance science or its applications. The newest class of AAAS Fellows will be formally announced in the AAAS News and Notes section of the journal Science on Nov. 27, 2020, and a virtual induction ceremony will be held on Feb. 13, 2021.

Kiick and Furst were elected as part of the AAAS Section on Engineering. They both joined UD’s faculty in 2001.

Kiick, Blue and Gold Professor of Materials Science and Engineering, was elected as an AAAS Fellow for contributions to the synthesis and application of peptide-based self-assembled materials for tissue engineering and drug delivery, and administrative leadership at the University of Delaware.

“The AAAS has an illustrious history of outreach and advocacy both for and within the sciences. Their activities are critical in supporting the science and scientists who are addressing increasingly vexing global challenges,” said Kiick. “I am honored and humbled to have been elected as a Fellow, and delighted to be elected along with Eric Furst, with whom I’ve collaborated for many years.”

Among other projects, Kiick leads collaborative research to create new drug delivery systems to treat diseases that affect connective tissue and advancing the development of therapies to treat the eye and gut.

From 2011 to 2019, Kiick served as the deputy dean of the College of Engineering, working to develop interdisciplinary graduate and research partnerships and strengthen the college’s intellectual and physical infrastructure. Kiick will become Chair of the Department of Biomedical Engineering on Dec. 1, 2020.

A Fellow of the American Chemical Society and a member of the National Academy of Inventors, Kiick has published nearly 175 articles, book chapters, and patents, and has delivered over 200 invited and award lectures. Kiick’s honors have included several awards (Camille and Henry Dreyfus Foundation New Faculty, Beckman Young Investigator, National Science Foundation CAREER award, DuPont Young Professor, and Delaware Biosciences Academic Research Award, Leverhulme Trust Visiting Professor, Fulbright Scholar) as well as induction as a Fellow of the American Institute for Medical and Biological Engineering and of the American Chemical Society Division of Polymer Chemistry. She also serves on the advisory and editorial boards for multiple international journals and research organizations.

Furst, professor and chair of the Department of Chemical and Biomolecular Engineering, was elected as an AAAS Fellow for seminal contributions to a range of topics in soft matter science and engineering, with a particular focus on colloid science and rheology (a branch of science dealing with the deformation and flow of matter).

For example, his research answers questions such as why paste materials stiffen as they age and what makes gels elastic. Furst and Kiick have even collaborated on several projects in soft materials.

“Kristi and I started at UD together and forged some great science together over the years,” he said. “It is a distinct honor to be recognized along with her by the AAAS. The AAAS mission to advance cooperation in the sciences and support scientific research, education, and outreach for the betterment of all humanity is deeply shared among my colleagues in the Department and College.”

Furst is a Fellow of the American Chemical Society and a recipient of many awards and honors, including the NASA Exceptional Scientific Achievement Medal, Award for Top Application from the International Space Station from the American Astronautical Society, Society of Rheology Publication Award, DuPont Young Professor, and National Science Foundation CAREER award. He is the author of Microrheology by Oxford University Press and more than 115 articles and book chapters. He has delivered nearly 150 invited and award lectures, and he serves on the advisory and editorial boards for multiple international journals and research organizations, including the American Institute of Physics Board of Directors.

The tradition of AAAS Fellows began in 1874. UD has 16 other AAAS Fellows, including eight engineering faculty.